An Adelaide schoolboy with a heart condition is currently the highest individual fundraiser nationally in the Heart Foundation’s Jump Rope for Heart program.

Jump Rope for Heart is a skipping and fundraising program run in Australian primary schools throughout the year. It encourages students to have a positive attitude towards exercise, healthy eating and heart health, while raising vital funds to fight heart disease.

Twelve-year-old Harry Palmer is in Grade 6 at Sunrise Christian College, Marion, which is doing the program for the first time this term. Harry has skipped 10 hours and raised over $10,000. This is more than any other student in all of Australia so far this year.

Harry’s achievement is even more amazing considering he has a heart condition himself.

Harry was one of identical twins. Due to complications during the pregnancy, Harry’s brother, Oscar, died in the womb and Harry’s heart did not form properly. He was born prematurely at 30 weeks with a hole in his heart and a damaged valve.

Often a hole in the heart will heal on its own, but this wasn’t the case with Harry. When he was just five years old, Harry had an operation at Royal Children’s Hospital in Melbourne to repair it.

Harry’s dad, Matt, said his son still gets a bit puffed at times and is closely monitored by a cardiologist, as he may need more surgery in the future to fix his valve.

“But otherwise, Harry is like any other kid his age. He loves motorbikes and competes at the motocross track in Victor Harbor. He also plays basketball and wants to be a builder like me when he leaves school,” Matt said.

“The best thing about Harry is his personality. He has a lot of ‘heart’. Despite everything he has been through, he is resilient, generous, positive and always smiling. He would give up anything for anyone; he’s just that kind of kid.”

Matt also describes Harry as a “tough little tacker” who throws himself wholeheartedly into everything he does, including the Heart Foundation’s Jump Rope for Heart program.

Harry’s school mates have also been putting in a huge effort. Students at Sunrise, Marion have skipped a total of more than 189 hours and raised over $14,000 for the Heart Foundation – exceeding their $11,000 target.

“It has been wonderful to see excitement and generosity for the Jump Rope program grow amongst our community,” said Henry Engelbrecht, Principal at Sunrise, Marion.

“Jump Rope for Heart is a real-life example of our school’s ethos to educate heart and mind, build character, and instil a sense of community service in each child.” Mr Engelbrecht said.

“We are especially proud of Harry and his fundraising efforts. He has shown that if we be strong and do not give up, our hard work will be rewarded. We hope that he will inspire others to look after their own health.”

Schools that participate in Jump Rope mark the end of the program with a “Jump Off Day”. This gives students a chance to show off the skipping skills they have learned throughout the term. Sunrise, Marion staged its Jump Off on Thursday 9 September 2021.

The Heart Foundation’s Heart Health Manager South Australia, Dr Marie Ludlow (PhD), thanked Harry, his fellow Sunrise students and the thousands of other school children across the state who are taking part in the Jump Rope program this year.

“As these children are discovering, Jump Rope for Heart is lots of fun and great exercise, but it also helps the Heart Foundation in its important work funding lifesaving research and health projects,” said Dr Ludlow.

Heart Foundation-funded research has helped make big advances in the prevention, diagnosis and treatment of heart disease over the past six decades.

“In response to the Coronavirus pandemic, we have developed new ways to engage with teachers, kids and parents. This includes some terrific online videos about skipping and heart health, as well as instructional videos on how to do neat tricks like the ‘Criss Cross’ and the ‘Awesome Annie’.”

Jump Rope for Heart is one of Australia’s favourite school physical activity programs, inspiring kids to embrace skipping as a fun way to get active.

Since the program’s inception in 1983, more than 10 million Australian kids and more than 90 per cent of Aussie primary schools have taken part in Jump Rope for Heart. In that time, schools have raised awareness and more than $106 million to help the Heart Foundation fight heart disease – Australia’s single leading cause of death. 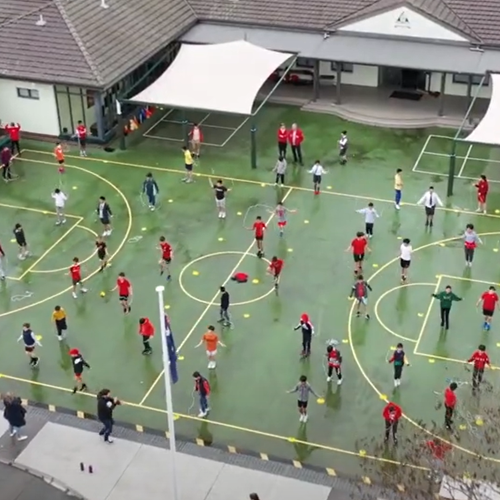